It would be rather distressing if we couldn’t alter our computer data, never able to add, delete, or change files. On the other hand, it would be quite alarming if computer memories were completely fluid, changing on a whim! Every time we save a new version of a file, we rewrite computer memories, and we take for granted that we can do it quickly, reliably, and for the long term. Magnetic materials form the heart of non-volatile computer memories, and these tiny magnetic bits are often stabilized by a phenomenon called exchange bias. The ability to control exchange bias provides a pathway for writing magnetic memories. In the image above, we use a laser to write and then read exchange bias, in the shape of the letter “N” (Go Cornhuskers!!).

Typically, in a ferromagnet, the net magnetic moment may point either up or down, but with no preference for either. Interestingly, however, when placed in intimate contact with an antiferromagnet, the ferromagnet becomes biased—that is, it prefers one direction over the other.

Here our antiferromagnetic material is chromium oxide (Cr2O3), in which the magnetism of layers alternates between pointing up and down (Fig. 3). The role of the ferromagnet is played by an alternating stack of cobalt and palladium atoms. When the two materials are put in contact at an atomic level, the result is—drumroll, please—EXCHANGE BIAS! Now, the ferromagnetic stack of cobalt and palladium orients so their magnetism preferentially points up rather than down.

As the video below shows, we can “write” the exchange bias using a tightly focused laser beam as our pencil. First, we apply an external magnetic field that opposes the existing bias. When the laser beam is applied, it heats only the tiny region directly beneath it. This very local heating, caused by the sharply focused laser beam, allows the magnetic field to alter the bias direction in the material. Away from our laser pencil, the bias stays put. This method gives us an easy way to rewrite magnetic memories using a “sharp,” non-contact writing tool (Fig. 4).

Finally, we can erase the memory completely by heating the entire area in the presence of magnetic field, thereby wiping the bias clean.

By varying the combination of laser beam and magnetic field applied, we can write, read, and erase memories, much like the actions of a tiny Magna Doodle (Fig. 5). 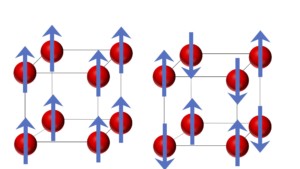 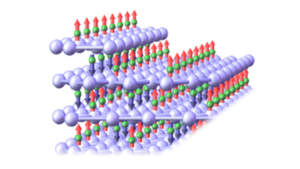 Fig. 3 (Click to enlarge) The antiferromagnet Cr2O3 with the magnetism of chromium atoms alternating between up and down. 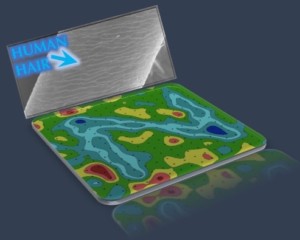 Fig. 4 (Click to enlarge) The letter N written as exchange bias using a focused laser. A scanning electron micrograph of a human hair sets the scale.

Fig. 5 (Click to enlarge) By varying the combination of laser beam and magnetic field, we can create a kind of atomic-level Magna Doodle, writing, reading, and erasing data.
TAGS: #exchange bias    #nanomagnetism
PRINT
SHARE THIS POST:
0
0
0
0