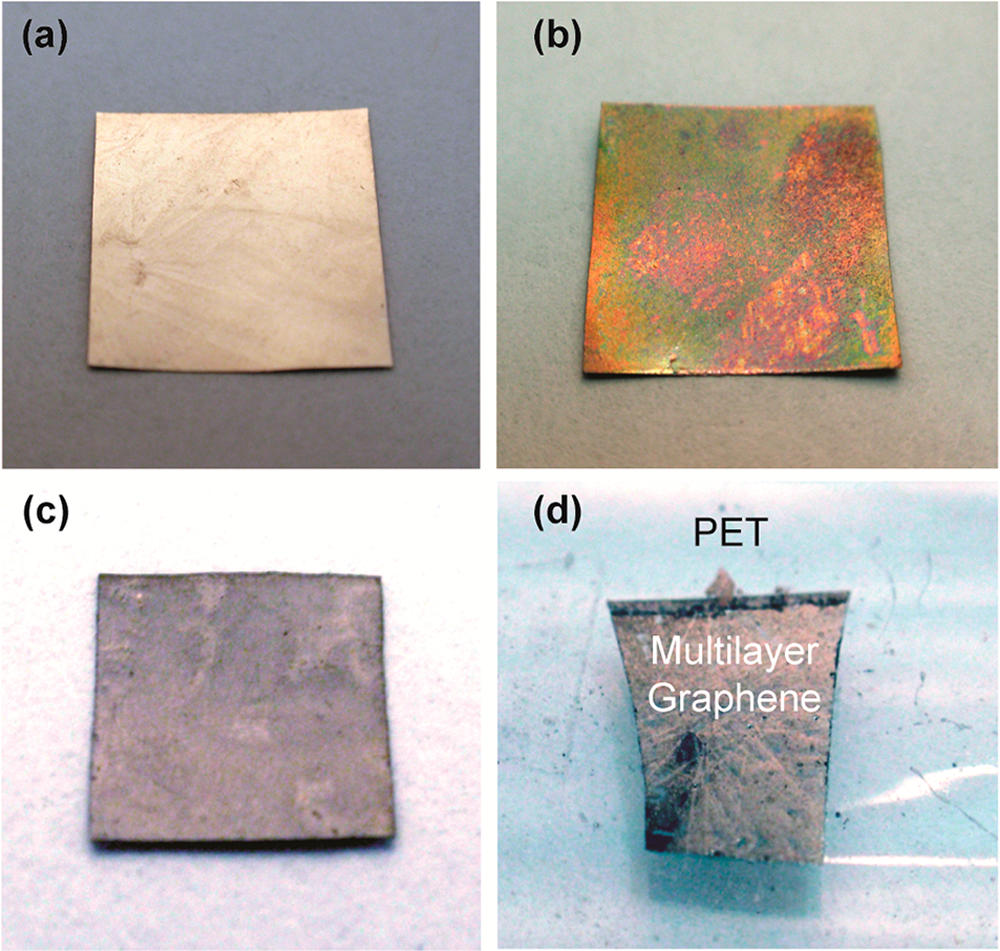 Graphene consists of a single layer of hexagonally-arranged carbon atoms. It has many properties that make it deserving of its reputation as a “wonder material,” including its strength, its high thermal and electrical conductivity, and its impermeability to diffusing atoms and molecules. In their labs, researchers rely on a method called Chemical Vapor Deposition (CVD) to grow thin films of graphene, as well as other nanomaterials. The Materials Research Science and Engineering Center at the University of Wisconsin-Madison has developed a procedure to produce graphene films through CVD in the classroom using isopropanol as the carbon source. The reaction conditions provided in the detailed experimental procedure below consistently result in the growth of high-quality, continuous graphene that fully covers the substrate.

Ni foil preparation: Use scissors to cut a square piece of Ni foil, 1 cm x 1 cm, and submerge the sample in glacial acetic acid for 5 minutes to etch the oxide from the Ni surface. White vinegar can be used instead of acetic acid if the etching time is extended to overnight. After etching, dry the Ni foil with a cloth or stream of air and flatten it between two flat, clean surfaces, such as microscope slides. Maintaining the Ni foil as flat as possible throughout the experiment helps ensure uniform graphene growth and successful transfer of the graphene film to an optically transparent substrate after synthesis. 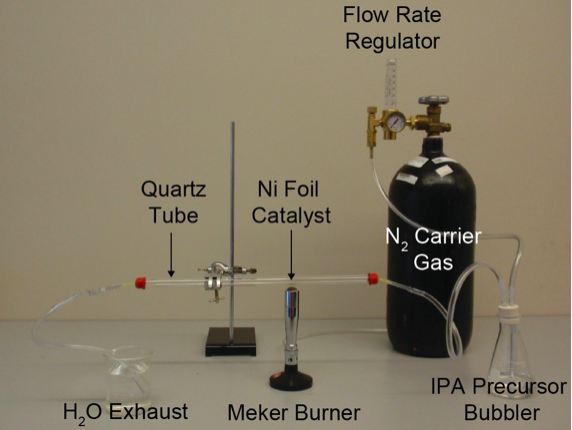 Experimental apparatus for CVD of graphene.

N2 tank assembly: Connect the gas regulator to the N2 tank with a wrench. At this point in the procedure, keep the N2 tank valve and the N2 flow rate control dial closed (turned completely clockwise).

Warning: Never open the N2 tank valve without securely attaching the regulator or else high pressure gas will rapidly expel from the N2 tank. In addition to the dangers associated with the high velocity of the N2 stream, the N2 gas displaces O2 in the air, which may result in suffocation. Also, securely support the N2 tank to a stable fixture; do not leave it freestanding. 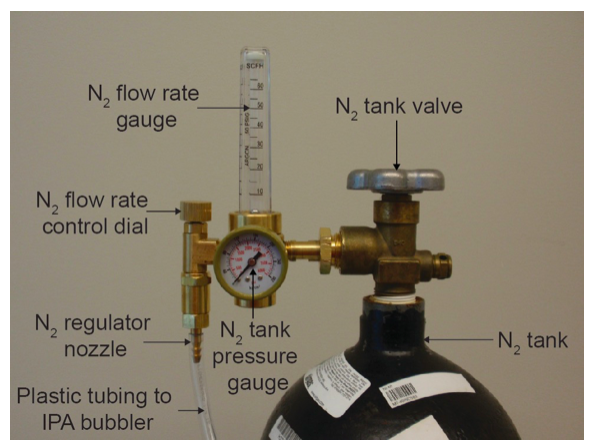 IPA precursor bubbler assembly: Add 80 mL of isopropanol (IPA) to a 250 mL Erlenmeyer flask. Cut the stem of a wash bottle into two straight segments of roughly equal length. Push these stems into the holes of a two-hole rubber stopper. Attach a piece of plastic tubing to one of the stems, such that the tubing is fully submerged in the IPA when the two-hole rubber stopper seals the Erlenmeyer flask. The N2 will be supplied to the bubbler via this stem, which is called the supply stem. The N2/IPA vapor above the IPA liquid will flow out of the bubbler through the other stem, which is called the exhaust stem. Seal the Erlenmeyer flask with the two-hole rubber stopper. It is important to use plastic tubing with inner diameter of approximately 6.4 mm (0.25 inches) throughout this procedure. Otherwise, the flow rates provided here will need to be adjusted to account for the difference in diameter.

Warning: Consult the material safety data sheet for IPA before using this chemical. 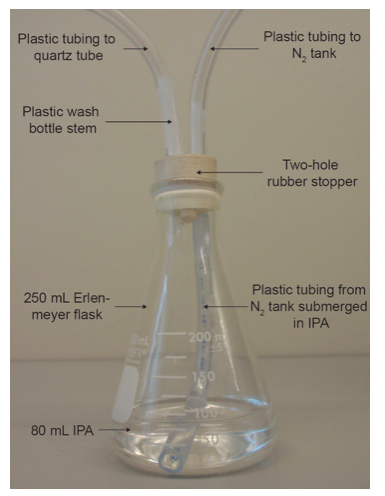 Reaction chamber assembly: Secure a quartz tube that is approximately 41 cm (16 inches) in length, with an inner diameter of 13 mm and outer diameter of 15 mm, to a ring stand, so that its long axis is parallel to the ground. Adjust the height of the quartz tube so that the Meker burner can be positioned approximately 1 cm below the quartz tube. Push a 1 mL syringe equipped with a needle [18 gauge and length of 3.8 cm (1.5 inches)] into the open end of a piece of plastic tubing. Connect the other end of the plastic tubing to the exhaust straw of the IPA precursor bubbler. Fit a 1.25 cm rubber septum snugly into the quartz tube. Puncture the center of the septum with the needle so that most of the needle is inserted into the quartz tube, as shown in the figure. It is critical that the septum fits tightly into the quartz tube so that no oxygen gas or water vapor from the air diffuses into the system during the reaction. 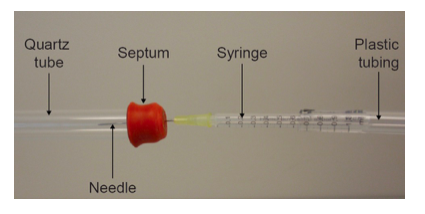 On the other hand, in parallel, the gas stream is split to each system so that each experimental setup receives an independent gas stream. We recommend that the flow is split between the IPA precursor bubbler and the upstream end of each experimental system so that only one IPA precursor bubbler is needed to accommodate all setups. The main advantage of connecting the setups in parallel is that each tube receives its own gas stream, so this method is more likely to produce high-quality graphene than the series connection. The main disadvantage of connecting the setups in parallel is that gas flow splitters (crosses and/or tees) are needed. However, these items are only $0.44 apiece.

Warning: Do not use a glass tube instead of a quartz tube for the reaction chamber, because glass is less stable and less resistant to cracking at the high temperatures reached during synthesis. Be careful when using sharp needles to avoid puncturing oneself, and dispose of the needles properly.

Gas flow introduction: Now, introduce the N2 flow into the system with the gas flow regulator. Ensure that the N2 flow rate control dial is closed (turned completely clockwise). Open the N2 tank valve by turning the valve counterclockwise. The N2 tank pressure gauge reading should increase. If the gauge still reads 0 psi, the N2 tank is empty. In order to introduce N2 into the reaction chamber, slowly open the N2 flow rate control dial by turning it counterclockwise. The flow of N2 through the system is indicated by the presence of bubbles in the IPA precursor bubbler and in the H2O exhaust beaker. Adjust the flow rate control dial to maintain a flow rate of 3 bubbles/second. The flow rate can be measured by counting the number of bubbles through the IPA bubbler or H2O exhaust over a given time span. The flow rate measured in the IPA bubbler and in the H2O exhaust should be nearly equal. If they are not the same, there is a leak between the IPA bubbler and H2O exhaust that must be repaired before beginning the graphene synthesis. In order to repair leaks, ensure that all connections are tightly secured into position and apply more Parafilm to the connections.

Warning: Introduce the N2 flow gradually by slowly opening the N2 flow rate control dial to prevent the needles from expelling from the septa.

H2O vapor desorption: After purging the system for 5 minutes and letting the gas flow rate stabilize, ignite the Meker burner. In order to achieve the maximum temperature, rotate the shaft of the burner such that the holes at the base of the burner are aligned. Quickly move the burner along the entire length of the quartz tube for several seconds to remove H2O adsorbed to the inside of the tube. This H2O desorption is observable by eye. While sweeping the flame, do not expose the Ni foil to the flame for more than 1 second to ensure that graphene growth is not initiated. Also, do not expose the ends of the quartz tube to the flame for more than 1 second or the needles may overheat, which can melt the syringes.

Warning: Be careful when operating the Meker burner, which outputs a hotter flame than typical Bunsen burners. Never leave the flame unattended, and locate the nearest fire extinguisher in advance.

Graphene synthesis: Once the H2O stops visibly desorbing from the quartz tube, place the flame of the Meker burner approximately 1 cm (the hottest part of the flame) directly under the Ni foil to begin the graphene synthesis. The Meker burner must be used because it is able to reach a sufficiently high temperature of 550-600 °C to ensure high-quality graphene growth. Typical Bunsen burners only reach 350-400 °C. Allow the reaction to proceed for 5-10 minutes. In order to terminate growth, extinguish the Meker burner by turning off its gas source. Allow the quartz tube to cool for 3-5 min. After the quartz tube has cooled, close the N2 tank valve by turning the valve clockwise to stop the gas flow. Close the flow rate control dial by turning the dial clockwise. Disassemble the setup and carefully remove the Ni foil, which should now be coated with graphene. The graphene-coated Ni foil should be grey (left); if it is a different color, such as red, green, yellow, or blue (right), the Ni foil probably oxidized during the synthesis and graphene most likely did not grow. This oxidation is a result of a leak into the system, either due to a low N2 flow rate (less than 1 bubble/second) or a poorly sealed apparatus.

The oxidation rate of graphene-coated Ni foil is compared with that of bare Ni foil to confirm the presence of graphene, and to demonstrate the high impermeability of graphene. Graphene-coated Ni foil (left) and bare Ni foil (right) are placed in the quartz reaction tube, which is kept open to atmosphere. The samples are heated with the Meker burner to 550 °C. After 2-5 minutes, the flame is turned off and the samples are inspected. The bare Ni foil oxidizes rapidly, turning different colors as the oxide thickness increases, eventually turning green as the oxide reaches a critical thickness. In contrast, the graphene-coated Ni foil remains grey, indicating that the underlying Ni foil is protected by the graphene and, therefore, oxidizes to a lesser extent. This high impermeability of graphene makes it an excellent diffusion barrier.

Supporting Image
Why it Works

Inquiry elements can be added to this laboratory experiment by allowing students to predict and test the effect of multiple CVD parameters on the graphene growth. The graphene synthesis consists of many elementary processes that occur throughout growth,  including (1) adsorption of IPA onto the Ni surface, (2) decomposition of IPA on the Ni surface to form C atoms, (3) dissolution of C atoms into the Ni bulk, (4) supersaturation of the Ni bulk, (5) precipitation of C from the Ni bulk to the Ni surface, (6) diffusion of C on the Ni surface, (7) nucleation of graphene islands from the C on the surface, and (8) attachment of C to the existing graphene islands.6, 7, 11, 12 These processes are governed by basic chemistry concepts, such as adsorption, solubility, decomposition, precipitation, oxidation, reaction kinetics and thermodynamics, crystal nucleation and growth, phase diagrams, and vapor pressure, and can be manipulated by changing the CVD conditions to affect the graphene growth rate and coverage. For example, by considering reaction thermodynamics and kinetics, students can predict how changing the growth temperature, precursor flow rate, and precursor concentration will affect the reaction rate. We find that with increasing temperature, increasing flow rate, and increasing precursor composition, the reaction proceeds faster and, consequently, after a given reaction time, the graphene coverage on the Ni surface is higher.