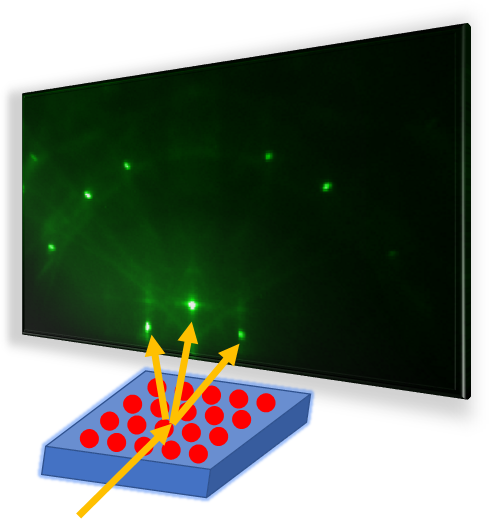 Have you ever wondered why some materials are hard and others soft, some conduct heat or electricity easily while others don’t, some are transparent to light while others are opaque . . . and on and on and on? The material universe is vast and diverse, and while a material’s properties depend in part on the elements it is made from, its structure—how it is built from its constituent atoms—can also have wide-ranging effects on how it looks, feels, and behaves. For example, both graphite and diamond consist only of carbon atoms, but while graphite is a soft, inexpensive material used in pencil lead, diamond is the hardest known material (Fig. 1). To understand these effects, physicists use measurement techniques that allow us to see what is going on at the level of atoms and molecules.

You may be accustomed to seeing light represented as a wave, but our ability to see objects relies on the fact that light can also behave like a particle. Individual particles of light called photons bounce off an object like tiny tennis balls, entering our eyes where they form an image. If we want to see more detailed features of an object, we might use an optical microscope to “zoom in.” But there is a limit to this process. When the features we want to see are smaller than a few hundred nanometers, the wave nature of light dominates its behavior. In other words, light no longer behaves as a particle, so our traditional method of seeing objects no longer works. Fortunately, the wave nature of light turns out to be extremely useful for probing very small features of materials, down to the atomic scale.

This process relies on a phenomenon called interference. When two waves meet, they combine in ways that enhance some parts of the wave while reducing other parts. You may have seen this happen with water waves: when the crests of two waves collide, the resulting crest is bigger (called constructive interference), but if the crest of one wave collides with the trough of another wave, they cancel one another out (called destructive interference). We can produce a similar effect with light waves by passing them through a series of slits. In Fig. 2, a wave passes through two slits, generating two separate waves. The interference between these two waves produces a pattern of strong and weak wave motion—strong where the interference is constructive and weak where it is destructive. We can also increase number of slits, and therefore the number of waves produced. The interference of multiple waves is diffraction.

As the slits are moved farther apart, the pattern persists, but the strong and weak areas move closer together (see Fig. 2). In other words, we say that the diffraction angle decreases. The relation between diffraction angle and slit separation can be used to probe the atomic arrangement in crystals.

Crystals are solid materials with their atoms arranged in an orderly, repeating pattern; one familiar example is sodium chloride (NaCl), better known as table salt. Fig. 3 shows the atomic arrangement of table salt, in which the Na and Cl atoms form a three-dimensional array. This arrangement contains many different atomic planes, or cross-sections, which may act like gratings with slits that diffract a light wave. If we measure the angle between the original wave and the diffracted wave, we can calculate the separation of the planes, just like the distance between the slits!

In practice, to use diffraction to probe atomic arrangement, two conditions are required: the atoms need to have enough order that there is contrast between strong and weak parts of the diffraction pattern, and the wavelength must be smaller than the distance between atoms. This is where x-rays are powerful. When most people think of x-rays, they think of imaging—of a broken bone, for example. But x-rays are actually electromagnetic waves, just like visible light, but with an extremely short wavelength (about one-tenth of a nanometer, or the size of a typical atom).

In principle, any wave with an appropriate wavelength can be used for probing material structures via diffraction. Specifically, microscopic particles, such as electrons and neutrons, also have a wave nature which can be used to visualize a material’s structure. Fig. 4 shows the similar diffraction patterns obtained from aluminum foil using x-rays and electrons of similar wavelength. Different types of waves, including x-rays, electrons, and neutrons, each have advantages and drawbacks, and multiple methods are often used to create a more complete picture of a material’s atomic structure. 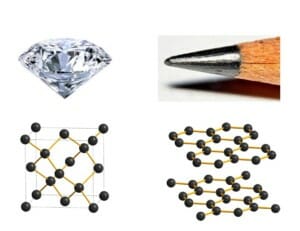 Fig. 1 (Click to enlarge) While both diamond and graphite consist only of carbon atoms, the arrangement of their carbon atoms is responsible for their vastly different properties.

While both diamond and graphite consist only of carbon atoms, the arrangement of their carbon atoms is responsible for their vastly different properties. 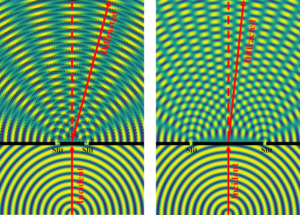 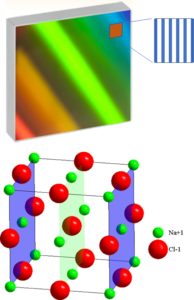 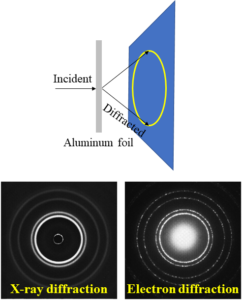