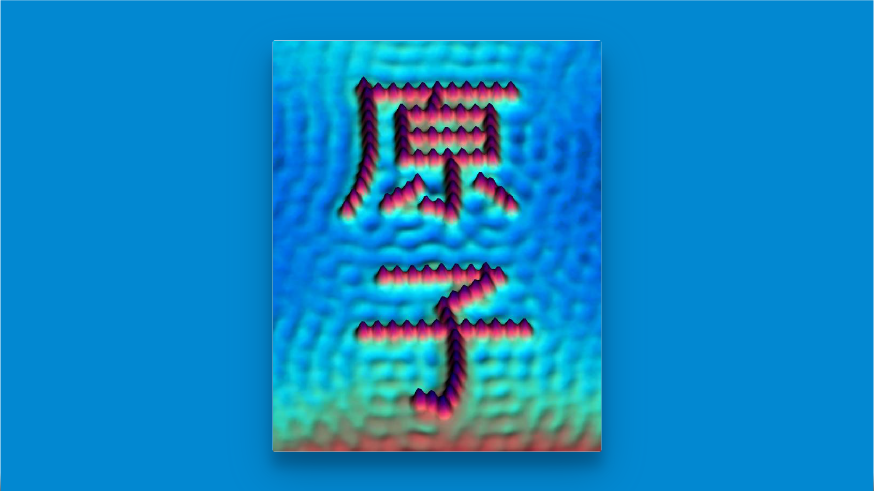 How is a picture taken?
You’re lining up your phone to take a picture of your dog. Light comes down from the sun, bounces off the dog, and into your camera lens, allowing you to take the photo. Your eyes work similarly, taking in all the light particles, known as photons, that are scattering off of objects in the world. Most things “see” by detecting these bouncing photons, which is why both you and your phone have a hard time seeing anything at all when the lights are off.

But what if you want to photograph something much smaller than your dog? What if you want to take a picture of an atom? While microscopes may be used to help see smaller objects, photons have their limits. Two atoms sitting next to each other are too close together to be able to tell apart with photons. If a photon bounced off of one of them, it would be impossible for a camera to be able to tell which exact atom the photon bounced from. Atoms are simply too small to use photons to take a photograph of. In order to get images of atoms, these photons need to be replaced with another particle better suited to take these tiny pictures.

Electrons are the new photons
If two objects are brought close enough to each other, under the right conditions electrons from one object are transferred to the other. What’s useful is that these electrons don’t suffer the same problem the photons do. Even if two objects are incredibly close, such as two neighboring atoms, it is possible to detect which electron came from which atom.

So instead of seeing with photons, like a normal camera, atoms are seen with electrons. Since the particle being used to see with is now different, the “camera“ will need to be different as well. Traditional cameras have a lens that lets the photons through for the camera to detect. Electrons travel differently than photons, so instead of a lens, a wire with an extremely sharpened end is used to pull these electrons through to equipment that can detect them. If the wire is sharp enough at its tip, it will be able to tell which atom the electron comes from.

By moving this sharpened wire tip across a flat surface, electrons may be received from all of the objects present. This wire can image the shapes of atoms due to a special relation between how far an object is from the wire, and how many electrons it will give up. Objects further away from the wire give only a few electrons, while objects really close to the tip will give it many electrons. The software connected to the wire will draw a picture based on the electrons it receives, coloring in bright spots where it feels a lot of electrons, and dark areas where it feels it is receiving only a few electrons. This is how these atoms are detected, and how their picture is taken. With a camera, objects are seen by detecting the photons that bounced off of them. Atoms, however, are seen by detecting their electrons. So when the wire produces a “photo”, it is actually visualizing the electrons that the objects hold inside themselves. Using sharp wires to take pictures by detecting electrons from surfaces is a technique known as Scanning Tunneling Microscopy, or STM for short.

More than just a camera
It should be obvious by now that the way that STM captures an image is pretty different from how a normal camera would. The unique way STM produces pictures not only enable it to image really small objects, but also allow it to go beyond what a typical camera can do. STM is not just for taking pictures.

If the STM tip is moved very close to an atom, interactions between the two will cause the atom to be attracted to the tip. The tip may then pick up the atom and drop it back off at another location. Using STM, scientists can manipulate individual atoms, controlling where they lie on a surface. Structures can be built, words can be spelled out, and even movies can be made by using atoms to draw characters.

STM is a powerful tool, used to observe the smallest fundamental building blocks of our world. As technology trends towards smaller and smaller devices, STM remains an important tool. Using it, researchers can observe how materials are structured at an atomic level, and build their own atomic sized devices.

Fig. 1 (Click to enlarge) A photon comes down from the sun, bounces off the dog, and enters your phone through the camera lens. This is how your phone takes a picture, and how your eye sees.

Fig. 2 (Click to enlarge) Extremely sharp tips receive electrons from atoms when the two are brought close to each other.

Fig. 3 (Click to enlarge) An STM tip takes an image of an atom. When an object is close to the tip, it receives a lot of electrons, when it is far, it receives fewer. Using this basic idea, the tip can image atoms, as seen on the right, where an STM has created a picture of the atoms on a silicon surface. Silicon image courtesy of exo.net. 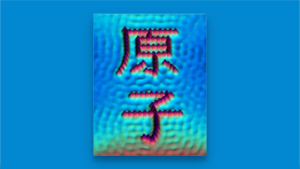