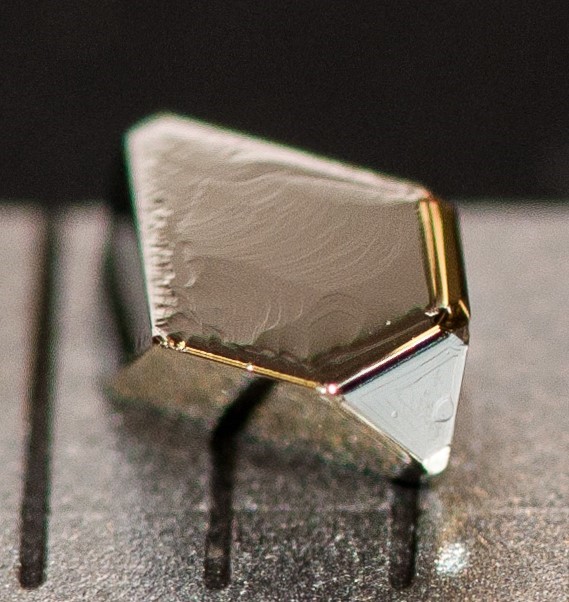 Sep 30, 2020 0
Computing with fool's gold?
Magnets, Gatorade, and the Quest for Energy-Efficient Computers
by Chris Leighton

What if I told you there is a material that can transform into a magnet with the flip of a switch? This wonder material is not new; it has already played a huge role in human history. One name by which it is known—pyrite—derives from one of its most important historical uses: the ability to spark a fire. You may know it better as “fool’s gold,” since the gold luster of pyrite has often led to it being mistaken for gold (Fig. 1). More recently, pyrite has emerged as a promising material for solar cells, since it is cheap, non-toxic, and absorbs light 1000 times better than silicon.

As scientists have continued to uncover this familiar material’s surprising secrets, they realized pyrite also presents unique opportunities to study magnetism—rather unexpected, since it is a non-magnetic material! Magnetism, in turn, has huge applications in information storage and computing. One very important goal is to control magnetic behavior by applying a voltage, using little current and therefore little power. This could reduce power consumption in the cloud, for example, creating more energy-efficient computer technology.

Pyrite’s atomic structure is simple, consisting of iron and sulfur, with two sulfur atoms for each iron atom—hence its chemical name, iron disulfide (Fig. 2). Cobalt disulfide is a closely related compound that has the same atomic structure, except that cobalt has one more electron than iron (Fig. 3). This extra electron makes all the difference in its magnetic behavior; unlike pyrite, cobalt disulfide has been known to be magnetic for decades. Surprisingly, however, adding only 1% cobalt to pyrite causes it to adopt magnetic behavior, too! In other words, although pyrite is a nonmagnetic material, just a tiny nudge is needed to create magnetism.

Recent research shows that electricity provides another way to control pyrite’s magnetic properties. Scientists already knew that applying a voltage to a material could convert certain types of magnetic behavior into other types, but they had never been able to induce ferromagnetism—the strongest and most useful type of magnetism—in an entirely nonmagnetic material. In this case, researchers used something called an “ionic liquid” to add electrons to a pyrite crystal, hoping this would have the same effect as adding cobalt to the crystal. An ionic liquid is composed of positively and negatively charged ions that are highly mobile, similar to an electrolyte drink like Gatorade. Researchers constructed a device that uses as little as 1 Volt (less than a household battery!) to move positive ions in the liquid to the surface of the pyrite (Fig. 4). These positive ions, in turn, attract negatively charged electrons. Remarkably, these extra electrons, just like the ones from cobalt, induced ferromagnetism in this typically nonmagnetic material, essentially at the flip of a switch!

This research could greatly expand the range of materials available for scientists and engineers to use in magnetic memory devices. Unlike many of the materials currently in use, pyrite’s availability is high and its cost is low (Fig. 5). And unlike many other candidates for novel magnetic memory devices, which work only at very low temperatures, the ferromagnetic behavior of pyrite shows signs of lingering to room temperature. This technique may offer a real possibility to induce useful room temperature magnetism in nonmagnetic materials. Fool’s gold may have more value than we thought! 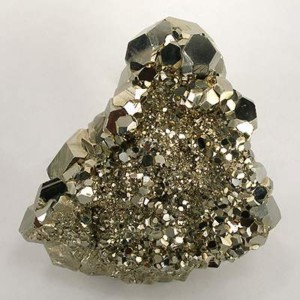 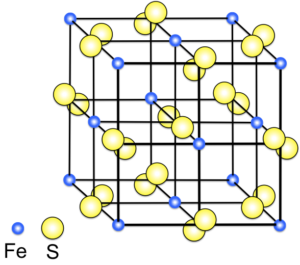 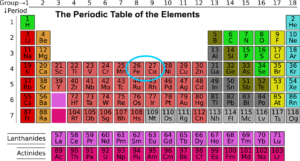 Fig. 3 (Click to enlarge) Iron and cobalt (circled in blue) are next to one another on the periodic table. This means the atomic structures of FeS2 and CoS2 are similar. 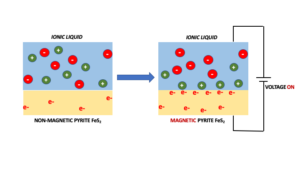 Fig. 4 (Click to enlarge) Everyday non-magnetic pyrite (yellow) adjoining an ionic liquid (blue) allows us to turn on magnetism. On the left, the positive and negative ions in the ionic liquid are randomly arranged, and the electrons in the pyrite are distributed through the material. When we apply a small voltage (right), positive ions in the liquid move to the surface of the pyrite. This, in turn, induces negatively charged electrons at the interface. In this region of higher electron concentration, the pyrite behaves like its near-relative cobalt disulfide and becomes magnetic! 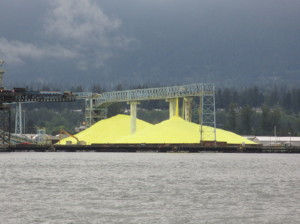 Fig. 5 (Click to enlarge) One of the major reasons for iron sulfide’s very low cost is the low cost of sulfur, which is essentially a waste product. This image shows a sulfur stockpile in Vancouver Harbor. (Wikimedia Commons)
https://advances.sciencemag.org/content/6/31/eabb7721
TAGS: #magnetic memory    #magnetism    #minerals
PRINT
SHARE THIS POST:
0
0
0
0