In the last decade, demand for faster, non-volatile computer memory—memory that keeps its state even when power is lost—has spawned interest in a data storage method called phase-change memory (PCM). This kind of memory has been used for many years to store data on rewritable CDs and DVDs, but so far, the large energy required to change the state of the material has made it impractical to use in electronic memory devices. If this challenge can be overcome, phase-change memory can be integrated with conventional silicon electronics for high-capacity data storage and more efficient computation.

PCM uses chalcogenide-based glass materials—those containing the elements sulfur, selenium, or tellurium (Figure 1) —which can be rapidly and repeatedly switched between a disordered phase and an ordered phase. These phases are easy to distinguish based on their optical and electrical properties. The disordered amorphous phase has low optical reflectivity (reflects little light) and high electrical resistance (is a poor conductor of electricity). The ordered crystalline phase, by contrast, has high optical reflectivity (reflects more light) and low electrical resistance (is a good conductor of electricity).

The existence of two distinct phases enables us to store data in the material by assigning one phase the role of “0” and the other the role of “1” in the familiar binary computing code. In other words, the contrasting properties of the amorphous and crystalline phases provide the vocabulary in which data can be “read.” Rewritable CDs, DVDs, and Blu-Ray discs rely on the optical contrast between phases to read data, as shown in Figure 2, while electronic PCM reads data from the differences in electrical resistance. In order to “write” data this way, however, we need to be able to control switching between phases of the material in a quick and precise way.

In PCM, nanoscale volumes of a phase-change material are heated by very short electrical pulses (Figure 3). To switch from the crystalline to the amorphous phase, the material is melted and cooled very quickly (~1 nanosecond, or one billionth of a second) so it ‘freezes’ in its disordered state. To switch from the amorphous to the crystalline phase, the element is heated to a lower temperature for a longer time (~10-100 nanoseconds), allowing the atoms to arrange themselves in a stable, ordered structure (Figure 4). Below ~100 Celsius (the temperature at which water boils), the material does not have enough energy to crystallize; this is what makes PCM a non-volatile memory, stable at room temperature and even at the higher temperatures reached in computer chips.

One of the key challenges of PCM, however, is the large amount of power required to heat the material enough to melt or crystallize it. Another difficulty is a phenomenon called resistance drift, in which the electrical resistance of the amorphous phase slowly increases over time and then decreases. Since electronic PCM relies on the electrical resistance of the material to store and read data, resistance drift negatively impacts the reliability of computer memories using PCM. Finally, when the material is melted and re-solidified many millions of times, as data is repeatedly rewritten in computer memories, the integrity of its nanoscale structure starts to degrade, and the devices become less reliable.

To overcome these challenges, we are working to gain a better understanding of the crystalline-amorphous transition, including the possibility of pre-melt or electronic amorphization—that is, getting the material hot enough to become disordered without melting and re-freezing it, which may reduce power requirements. We are also working to uncover the physical mechanisms behind the resistance drift of the amorphous phase. We use electrical measurements, together with electron microscope images of PCM devices, to better understand how the electrical properties of the material correlate with its nanostructure, and how this in turn results from different programming (heating and cooling) conditions. A better understanding of the crystallization and amorphization processes, the voids that form after repeated heating and cooling, and segregation of the elements (Ge, Sb, or Te) within the chalcogenide compound can be used to build PCM devices with higher performance and reliability. 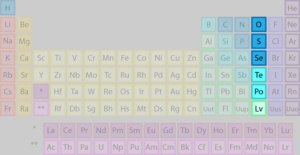 Fig. 1 (Click to enlarge) The chalcogens are found in group 16 of the periodic table. 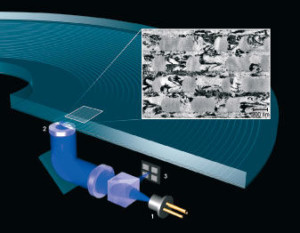 Fig. 2 (Click to enlarge) Schematic of a Blu-Ray disc from Friso Jedema: "The laser light is produced by a light-emitting diode (1) and subsequently focused by a lens (2) onto the phase-change layer, buried inside the rewritable disc. The reflected light is directed towards a photo detector (3). The inset represents a transmission electron microscope picture of written amorphous bits in a crystalline phase change layer." (Nature Materials 6, 90–91 (2007), doi:10.1038/nmat1832)

Fig. 3 (Click to enlarge) Simulation of the initial crystallization of the amorphous chalcogenide glass layer, followed by a programming Reset-Set cycle. The light pink represents the amorphous layer between two electrical contacts—a larger top contact and a smaller bottom contact, shown in grey. The colorful regions are the grains that form and grow during crystallization. When a "reset" pulse is applied between the two contacts, the region with the highest current density melts (dark pink); after the pulse ends, this region freezes as amorphous again (light pink), leading to a high electrical resistance between the two contacts. A longer, less intense "set" pulse then brings the element above the material's crystallization temperature but below its melting point, so the cell becomes fully crystallized - low electrical resistance - once again. The two resistance states are interpreted as a 0 and 1 (See below for full-size video.)