An electron can be described as either a particle or a wave (Fig. 1), and how electrons behave depends on how we detect and measure them in our experiments. The classic way to observe the wave-like properties of electrons is through the double-slit experiment, explained in the video below. Waves “interfere” with each other, either constructively (adding together to increase their magnitude) or destructively (partially or completely canceling each other out), as shown in Fig. 2. In a system like a wire where many electrons are moving, the electrons also interfere with one another. This interference occurs when imperfections or impurities in the atomic structure of the wire cause electrons to “scatter”—in the same way light scatters when it bounces off an object—and affects the wire’s electrical resistance.

Researchers at the University of Buffalo are studying how temperature affects electrical state using the material titanium trisulfide (TiS3). TiS3 is a linear chain compound that forms layers (Fig. 3). To make our devices, we isolate thin layers of our material by a process called exfoliation. The forces within each layer are strong, but the forces between layers are very weak. (These forces are called Van Der Waals forces, and you can learn more about them here.) Therefore, the layers are easy to separate, and we can use something as simple as Scotch tape to rip the material apart and isolate layers only one or two atoms thick.

If we reach low enough temperatures, however, we find that the multitude of impurities present in our disordered conductor actually freeze out, meaning they take up residence somewhere in the nanowire and do not move. These impurities are charged, so depending on their positions, they create differences in electric charge, or potential, across the nanowire. (Fig. 4). At such low temperatures, electrons can travel long distances without scattering, and they tend to scatter in similar ways when they encounter the frozen-out impurities. Many electrons traveling along similar paths results in more interference between electrons, producing the resistance fluctuations we see in our measurements.

While “perfect” conductors may exist only in textbooks and in theoretical research papers from before the 1980s, such idealized concepts allow us simplify and analyze complex problems. And sometimes, it turns out, an imperfect conductor may be the best conductor for the job. The emerging field of spintronics (discussed in the second video below, and in Peter Dowben’s post “Strike Up the Band Structure“) aims to create computers based on the spin property of electrons, and linear chain, disordered materials like TiS3 may be able to transfer information about an electron’s spin using only a very small current. Since the power used by an electrical device increases with the square of the current (twice the current requires four times the power, three times the current requires nine times the power, and so on), disordered conductors offer real potential to create incredibly low-power transistors that will revolutionize the tech industry!

As this case illustrates, quantum mechanical phenomena like electron interference are often counterintuitive, but we can quantify and implement them even if we don’t yet fully understand them. As the physicist John Bell famously said, “I am a quantum engineer, but on Sundays I have principles.” 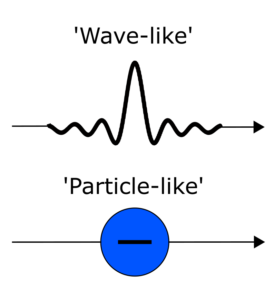 Fig. 1 (Click to enlarge) Electrons are so small that their behavior is 'wave-like' or 'particle-like' depending on the situation. Enter the domain of quantum mechanics!

Fig. 2 (Click to enlarge) Double-slit experiment showing bands of constructive and destructive interference between waves (Wikimedia Commons). Notice the alternating bands of light and dark produced on the right side of the image match the bands seen in the featured photo above. Check out the link below to see how you can perform a similar experiment yourself at home! 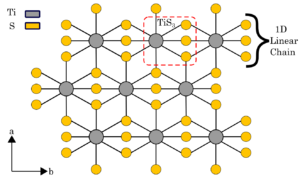 Fig. 3 (Click to enlarge) TiS3 is a linear chain compound. This is a cross-section of its crystal structure where the chains can be clearly identified. 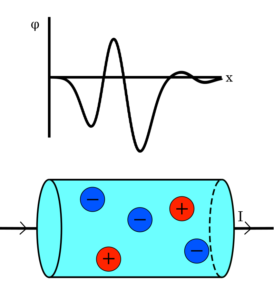 Fig. 4 (Click to enlarge) When several impurities 'freeze out', they form an electrical potential profile as shown in the top of this image. Because like charges repel and opposite charges attract, negatively charged electrons will tend to move from more negative to more positive regions.
https://www.scientificamerican.com/article/bring-science-home-light-wave-particle/
TAGS: #Electrons    #Fluctuations    #quantum mechanics    #wave-particle duality    #waves
PRINT
SHARE THIS POST:
0
0
0
0